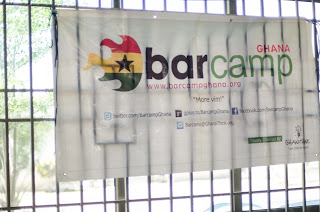 After a long period of uncertainty, looking for a venue and having to change the date, Barcamp Kasoa finally came off at the ICGC Transformation Temple in Kasoa on April 27, 2013. The theme was “Making an entreprising environment for an emerging market”. It was intentionally chosen as Kasoa is home to many small entreprises and businesses, has a very popular market and is emerging as a city with a fast growing population. Barcamp Kasoa was going to be the first Barcamp in Ghana this year. The Africa Works crew were there to do live streaming and will be prepared a short video about the event. There were some media reps (one from Graphic) and a media crew from Multi-TV.

The event started at 10am after attendees had registered and signed-in. The numbers were not very encouraging. It couldn’t be down to traffic at Kasoa since it was a Saturday morning. Most of the attendees were based in Kasoa which is great, since I personally didn’t want the event to be dominated by Accra residents. Emelia Agblevor welcomed the attendees and shared some info on Kasoa while I continued by telling the Barcamp Ghana story. The morevim movement. Interestingly, we didn’t say as many “more vims” during this event. Breakfast was served as spring rolls and chips together with “asana” (maize beer). Attendees were surprised to see the local drink being served. Asana is a popular drink in the Oduponkpehe area. 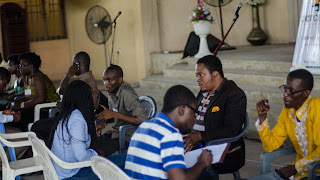 The next major item was a panel on the Barcamp Kasoa theme. The panel was moderated by Mawuli Tsikata and it dwelled on what the present state of Kasoa was and what was expected out of Kasoa in a couple of years. With expected projects like Hope City and West Hills Mall coming close to the area and a growing population, Kasoa is bound to be much more important on the West African scene. The Metropolitan Chief Executive, Nuhu Adams (of the Awutu-Senya area) was a panelist, alongside Naa Sunkwa Mills, Jerry Smith and Lawrencia Ofori. The panel was very insightful. Via the conversations happening there and on Twitter, one outcome was to build a Blood Bank for Kasoa.

Since the event was running a bit late, we decided to combine a few agenda items. Lunch was served – a choice of jollof, plain rice or waakye with assorted meat together with soft drinks. During lunch, we had a number of presentations. Daniel Arthur-Baidoo started us off by presenting his creations. He uses water sachet waste to create works of art. He showed an art work which shows a picture of Kwame Nkrumah made using folded sets of water sachet bags. He also showed us a glass table which is supported by the same material. See his work at Waste Has Worth. I had learnt about him via Twitter through a conversation he had with the Green Ghanaian. Bernard Akoi Jackson, who won at the Arts award at the National Youth Achievers Awards last year, also presented. The Odadee showed some of his art via a PowerPoint presentation and told us stories of where his art had taken him and shared many insights. Lawrencia Ofori took the attendees through a very fun session which taught “survival of the fittest” skills for the world of business. The exercise encouraged a lot of interaction as Barcampers had to go around trying to gain 3 of every kind. Getting the “Choco Milo” type was quite hard. 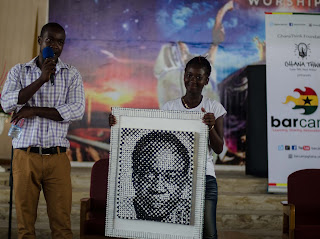 The content of the event was great, and the attendees were very satisfied with that. I wasn’t happy with the attendance as the members of the church where the event was held largely were absent. A few lessons have been learnt to guide the organization of a next event. Read this story compiled by GhanaThink to see what happened that day. Let me leave you with one great soundbite, the kind that gives us more vim to organize more Barcamps and continue building this network of Ghanaian changemakers, doers and entrepreneurs. See more pictures from Barcamp Kasoa 2013.

Various sponsors gave messages talking about products and why they were supporting Barcamp Kasoa. These included Google Ghana and Fiesta Condoms (DKT).

Jobcamps are free networking forums bringing people together to discuss jobs and (un)employment Ghana. They would feature resource personnel from the public sector, private sector,...read more →

BarCamp Kasoa 2013 is a free networking event to bring people together for a day of discussion, demos and dialogue about Kasoa, Ghana and beyond....read more →

Barcamp Kasoa 2014: Contributing to a healthy market for business

BarCamp Kasoa 2014 is a free networking event to bring people together for a day of discussion, demos and dialogue about Kasoa, Ghana and beyond....read more →